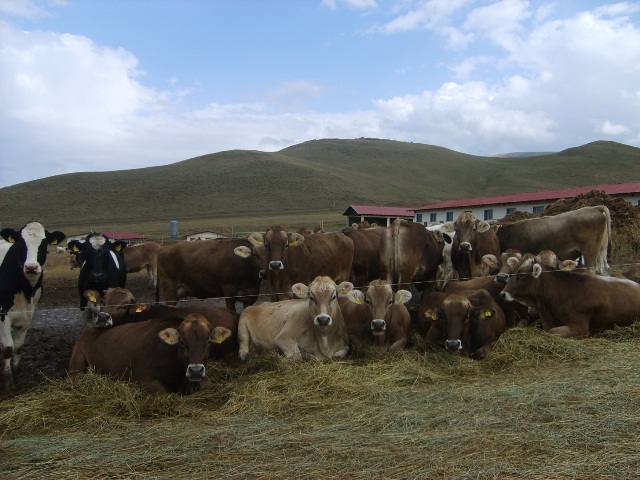 Animal husbandry in Armenia goes back as early as Paleolithic period when primitive forms of agricultural activities appeared in the huge territories of Armenian highlands laying between Asia Minor and Iranian plateau. The animal husbandary started developing in the Neolithic and early Bronze Age. Since that time animal husbandry acquired vital importance and from 2nd and 3rd millennium BC livestock breeding became main occupation of people. Livestock breeding in Armenian highlands fostered the creation of historical and cultural values. It is worth mentioning that for centuries, after the creation of Armenian alphabet (405 A.C.) the pages of old Armenian manuscripts (parchments) were made from well-processed skin of newly born calves. Old Armenian handmade carpets made from the wool of sheep bred in the Armenian highlands were famous for high quality and were exported to Middle East, India and Europe.     -

The existence of wild kindred of domestic animals proves that Armenia is the cradle of breeding agricultural animals.  There are wild sheep, goat, and hog in the country that are perhaps the wild ancestors of contemporary domestic animals. The dialogue about “Existence of reasoning among animals” of Metrodoris was very famous in Armenia. Armenian historians Yeznik Koghbatsi, Yegishe, Movses Khorenatsi addressed the issues relating to the animals raised in Armeina, their heredity and instincts.  In the 5th century the work of Barsegh Kesaratsi “Vetsorits” was translated into Armenian where the reproduction and instincts of the animals were described. Love for animals was expressed Armenian folklore and especially in Armenian national epic David of Sassoun, as well as in many fairytales, stories and songs that passed from one generation to another through centuries by oral speech.

Currently livestock breeding in Armenia is a sector with developed branches where along with traditional technologies modern technologies are also applied that enables adaptation of different agricultural livestock breeds to local climatic conditions.

In low-lying regions of the country the cattle is mostly housed in the stalls  all year round while in mountain and sub mountain regions free stall housing system is commonly used. The major concentration of livestock is in Gegharkunik and Syunik marzes and then come Shirak and Lori marzes.

The pedigree and yielding characteristics of the breeds raised in Armenia has been developed for years by using Brown Swiss. The first pedigree stations set up in the country go back to 20-30s of 20 century and Tashir (former Kalinino) and Stepanavan regions of the RA Lori marz were traditional cattle breeding centers.

At present cattle breeding sector shows growing tendency for investments and application of modern technologies that is mostly displayed in Syunik marz.

Pedigree heifers will be imported in 2015. In May and June of this year it is expected to import 257 heads of Holstein and Brown Swiss pedigree heifers from the Republic of Austria.

For development of animal husbandry in Armenia, the RA Government approved “Animal Husbandry” project in the frame of which 2000 heads of Holstein, Brown Swiss, Simmental pedigree heifers were imported and provided to 60 business entities subject to payment by installments. Annually 1500 heads of high value calves are produced а part of which is used for reproduction of herds and the rest is sold in the country to other cattle breeding farms.

Sheep breeding is one of the traditional animal husbandry branches in Armenia. For centuries due to efficient selection works several endemic species that are exceptionally adapted to the local climatic conditions are successfully breeding in Armenia such as Mazekh, Bozakh, Gharabahgtsi and Balbas. On top of that, Armenian stockbreeders raised a new medium-wool breed sheep. The new breed has white semi-harsh wool which is an excellent raw material for carpet manufacture.

In 60-70s of 20 century more than 2 mln heads of sheep were raised in Armenia but later this number drastically decreased.

However, due to the measures taken in recent years the number of sheep and goats is increased and is currently 746 thousand heads.

Sheep breeding is better developed in mountain and submoutain regions of the country owing to large grasslands. The biggest sheep population is raised in the RA Gegharkunik and Syunik marzes and then come Aragatsotn and Shirak marzes.

Over the last years in addition to the local breeds other sheep breeds were imported into the country, namely pelt wool breed, fertile Romanov breed, fat-tailed sheep of Edilbaev breed that are successfully adapted to the local climatic conditions.

Annually about 18 tons of mutton is produced in Armenia. There is room to export annually 180-200 thousand heads of sheep.

Swine breeding is one of the major branches of animal husbandry in Armenia and is more developed in Armavir and Ararat marzes with biggest concentration of pig heads. In the northern part of the country, in Tavush and Lori marzes free stall mountain and forest housing system is used

Thanks to the efforts of the scientists, local Armenian pork type breed was developed which is mainly raised in residential backyards. In commercial pig breeding farms  Landras, Petren, Duroc breeds are mostly raised which are used also for commercial interbreeding.

Annually 17-18 thousand tons of pork is produced in the country (live weight).

Due to selection works carried out by the Armenian scholars, the Yerevan breed of hens was developed with its black and white types. This breed is well adapted to the local climatic conditions and is mostly raised in residential backyards.