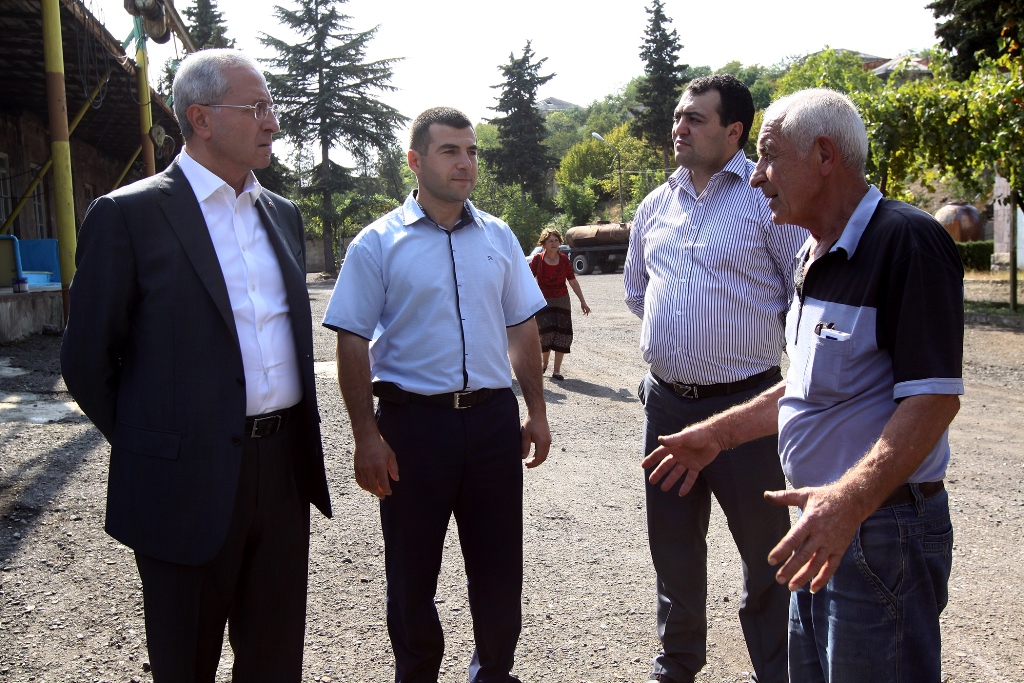 The RA Minister of Agriculture Sergo Karapetyan visited Tavush region to follow the process of grape harvesting. The Minister visited several bordering communities, and all procuring companies of the region.

“Bordering communities have always been in our focus and our goal is to maximize the support of the residents, who put their lives in danger cultivating crops,” Sergo Karapetyan said in his speech.

Garik Vardanyan, the director of Berd branch of Yerevan Brandy Company said that the company procures 200 tons of grapes daily, moreover all from Tavush region. He added that according to the contracts with vine-growers it is planned to purchase 4 100 tons of grapes, but the company is willing to carry out an unlimited amount of storage in case of a proposal of high-quality harvest. The company has already purchased 2 500 tons of grapes. He also reported that the factory has 19 permanent and 21 seasonal employees whose average salary is 120 thousand drams and they are all from Tavush region.

Then the Minister went to Aygepar wine factory. Here the grape procurement will begin on September 28. Although contracts are not signed with farmers beforehand, but the responsible officials assured they are ready to purchase the entire crop.

The Minister Sergo Karapetyan met with the vine-growers of Varagavan community, got acquainted with their problems. Vine-grower Svetlana Khachatryan informed that she has already received 2,5 tons of crops this year, has a contract with Berd branch of Yerevan Brandy Company and is going to sell the product.

In Aygehovit community the Minister talked to the vine-growers, who have great difficulty in collecting the grape harvest. The Minister urged to follow their security and heighten their vigilance.

During the visit the Minister also visited the grape procurement point in Berdavan community, talked to the farmers and answered their questions. The meeting was also attended by a number of governors of the surrounding communities. The Minister assured the vine-growers that although the procuring companies have problems, last year’s price will remain and the entire volume of the harvest will be consumed. The Minister said that the procurement point of Berdavan will be reopened in a few days, the Ministry will follow the process of payments in order to be made on time.

According to the Minister, last year about 15 thousand tons were produced in Tavush region, out of which 7 500 were procured. This year’s harvest is plentiful, there are areas where up to 25 tons of grapes can be received per hectare. In the region there are five companies, three of which already implement purchasing. Sergo Karapetyan urged residents not to rush to harvest, because the sugar content of grapes is still not very high once again assuring that the companies have a clear agreement that grape harvest will be consumed. Turning to the question of payments, the Minister noted that Yerevan Brandy Company branch pays within three days, the remaining companies pay according to their schedule.

At the end of the visit the Minister also visited Debedavan branch of “Yerevan Champagne Wines Factory” OJSC and Ijevan wine factory where the grape procurement has already started. The executive director Atom Egoyan said that this year they will purchase more harvest than it is required given the abundance of the harvest.